What is the Cloud and how can it help your Business?

What is the Cloud and how can it help your Business?

“The cloud” is a commonly used term, but very few people actually understand it. So what exactly is the cloud and how can it benefit your business?

Let’s start from the beginning. The first thing you need to understand about the cloud is that it is not a physical thing. The cloud is a network of servers used to host information, files, applications etc., and the chances are, you encounter the cloud daily. From Google Drive to iCloud, any time you store information without using up internal data, you're storing information on the cloud.

The term “cloud” was first used by Professor Ramnath Chellappa in 1997, with Salesforce becoming the first site to deliver applications and software over the internet in 1999. However the cloud didn’t gain mainstream attention until 2006 when Amazon launched its own cloud computing platform called Amazon Web Services (AWS). Providing online services to websites or client-side applications, companies in over 190 countries worldwide companies use AWS to host traffic and data. Social media sites such as Instagram and Pinterest use AWS, as well as thousands of start-ups and larger businesses.

Some servers provide an online service.

Adobe is a great example of this. They no longer issue their software via disks, instead users must pay a subscription to their services via the Adobe Creative Cloud.

Other servers are responsible for storing data. 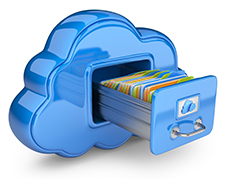 The Creative Cloud for example lets subscribers upload their work to the cloud, which consequently gives them access to their work from anywhere in the world. Social media sites such as Instagram also use this type of server to store images.

What are the benefits to working in the cloud?

In the past people ran applications or programs from software downloaded onto a physical computer or server in their building, however the cloud allows people access the same kinds of documents, software, etc. through the Internet. A business’ decision to move to the cloud is usually financially-motivated. Instead of buying their own hardware every couple of years – such as internal servers, hard drives etc., the cloud allows companies to simply pay for what they use, offering the flexibility to up or down-scale as necessary. Computers have allowed workers to be more efficient in recent years, and the cloud has played a large part of that. For example, if your company needs to quickly access to more resources, the cloud makes it easy and quick to do so.

How big is the cloud?

No one knows exactly how much space can be provided by cloud-based services. However, it was estimated in 2012, that 763bn floppy disks (remember those?) could fit into the cloud.

How secure is the cloud?

It has long been debated about whether the cloud is less secure than storing data on premise, and thus the idea of storing personal information somewhere “in the cloud” does make many people wary. However large companies – like Google – are responding to people’s concerns by stating that it would automatically encrypt data for paid cloud storage service users. As developments continue to progress, the cloud’s security will undoubtedly be increased in order to cope with demand and put users’ minds at rest.